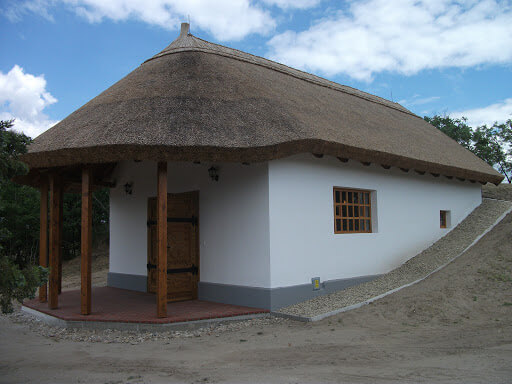 In the second half of the 19th century the Baghy family after purchasing an estate in Cserkeszőlő-Tópartpusztán, it constructed a steward house on its territory. In 1922, the widow of Baghy Béla  married Szinyei Merse Félixhez, the son of the famous painter. The couple by the extension of the earlier building and by several reconstructions built the today known manor at the lakeside land called at that time Kisasszonyszőlő.

The wine cellar was constructed at the West edge of Cserkeszőlő, next to the former castle, under a dune. It is the only building from the manorial ones of that time which survived the storms of the times. The dessert vermouth and the special sec, the popular products of the Szinyei Merse Félix farm were prepared here. The thatched roof forecourt provided the place for the processing of grape. You can get in the Czech vaulted cellar provided with double door on the stairs. Based on the Order no. 103/2012. (X. 1.) VM, the folk monument built in 1902 was completely reconstructed with the cooperation of the LADER Local Action Teams in the frame of the subsidies becoming available from 2012 for the purpose of the preservation the rural heritage.

After receiving back its original form, the historically important winery closely mirrors the beauty of the countryside. The building is used as a display room of the local products, and as the site of different village events, contributing to the touristic attractions of the area.

You can find us here